In November last year the Husband I took a 6 day holiday in France we stayed at Disneyland Paris as I found a very good hotel deal to stay on site. Furthermore Paris was only a 35 minute train journey from Disneyland.
Unfortunately we never made it to Paris as we were both frustratingly unwell two days into our holiday.

I love Disney and Oz equally! All my other loves are secondary...apart from the other half of course!! This was my first time at Disneyland Paris, and second time to any of the Disney Parks. I always wanted to go to one of the American Disney Parks first and finally got the chance to go to Disneyland California and Disney California Adventure last year, we both fell in love with the place and were now ready to go to a Disneyland a little closer to home.

So hey where does the Oz reference come into this! Well, I was set a secret Oz mission by another Oz friend Freddy Fogarty.... Ok maybe not so secret but I enjoyed being sent on an Oz mission no less.

The mission was to go to Fantasyland and take a ride on "Les Pays Des Contes De Fees" or the Storybook Land ride as there is the Emerald City and some characters from Disney’s Return to Oz on the stairs, Freddy wanted me to take some  close up pictures of the Emerald City and of the Oz character on the Stairs.
If it wasn't for Freddy I would have missed the Return to Oz themes altogether as we would have considered this ride a little to twee for us.

So here we go there is indeed an Emerald City, which uses some of the Return to Oz characters but only those that would have been in the Wizard of Oz i.e. Scarecrow, Tin Woodman and the Cowardly Lion are all straight out of the character designs from 1985 movie, Dorothy however is definitely more of a hint of Garland than Fairuza Balk.

Don't forget you can click the photo to enlarge! 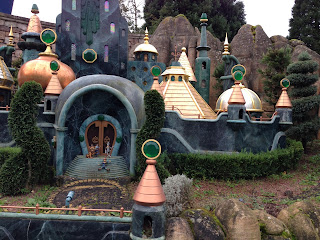 Take a look at this Emerald City something we don't really get to see in the Return to Oz, I did wonder if this is how we were meant to see the Emerald City in the movie? Notice that they get the Oz insignia back to front on top of the palace! 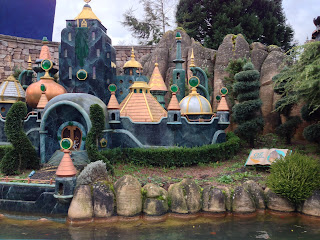 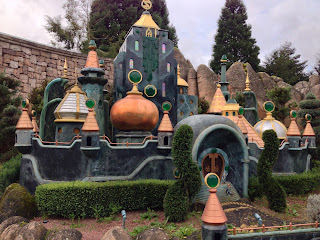 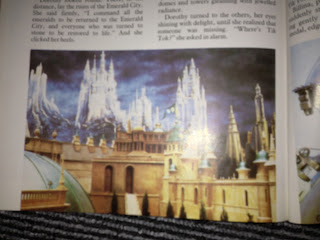 So now we have three takes by Disney of the Emerald City, it’s still a frustration that we never really get to see the outside of the restored Emerald City in Return to Oz.

That's not all the Oz we got to see on this trip, there is a show over in second paris Disney park The Walt Disney Studios  called Cinemagic, which is a mixture of live action FX and film effects toward the end of the show you see two main characters walk along the MGM Wizard of Oz yellow brick road toward the Emerald City unfortunately I don’t have a shot of this!

I love that Disney and Oz share several relationships lets hope the new Disney movie Oz: The Great and Powerful bring forth Baum’s Oz canon to receiving the film attention it deserves!

As for Disneyland Paris, the Park itself is very beautiful and stylised even more so than the Disneyland California park, The Walt Disney Studio's was tiny and not a patch on the Disney California Adventure park, both however were missing much of the charm and energy of the California parks. This In part I believe to be because it was not in
America!  The French cast just did not have the drive and enthusiasm of the American counter parts which is what makes Disneyland so magical! The Park it self was a little tired in a few place whereas the California Parks were spotless! We will go back as it is only a couple hours journey to get there but what I really can’t wait for now is to venture to Walt Disney World in Florida hope fully in 2014.

I’ll be back with my Oz book favourite number 7, this time it’s the first of several Baum Oz books.
Posted by Colin Ayres British Fan Of Oz at 15:59