Very Occasional Blogging: In at 8…… 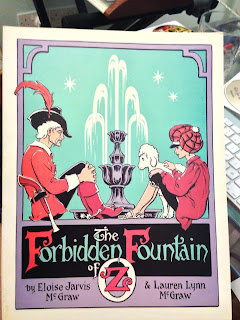 This is the first of the McGraw books in my top 10 and number 8 out of my favourite Oz books.

There is just something about Eloise writing style that I really enjoy, I think she is actually the most accomplished and skilled writer out of all of famous forty Oz writers.
Baum has to the most imaginative and descriptive. Although sometimes the way he writes could was little unusual it his bristling of imagination that carries you off not his use of word play.I don’t think any of the other famous Forty authors had quite same level of fantastical imagination as Baum, although Eloise comes close, and add that with her wonderful writing skills you have some great Oz books as a result. You also get an Oz that is good mix of Baum and Ruth Plumly Thompson's Oz, as I believe Eloise was a fan of the Thompson Oz books.
Eloise is a master at description and writes in a way that you can see the Oz she is describing something that only Baum was capable of for me. Thompson never manages to conjure images in my mind as she lacks the detail and description that make you believe in the characters or Oz. Thompson was strong for writing brisk jolly plots and creating lots of new characters, but the often lacked the depth of description that made her characters as enjoyable as Baum or Eloise's characterisation. I refer to Eloise often as I believe that she wrote the story in the main with assistance from her daughter.

This description has always stayed with me are little nuggets like " The small rough emeralds in the gravel of the street of the Emerald City and the streets are surfaced with crushed beryl", I love these tiny little details in the Mcgraw Oz work.

Ozma whilst attending an Oz festival is innocently given a glass of lemonade using the water of Oblivion from the Forbidden Fountain of Oz that was introduced in Baum's The Emerald City of Oz.
As a result Ozma goes missing and is assumed kidnapped! (Well why wouldn't her Oz courtiers think she was kidnapped it happened so many times before!)
Actually Ozma wearing her magic belt loses her memory completely and believes herself to be a girl called Poppy who has run away from the Emerald City, as she must have done something dreadful to be cast out helped to come to this conclusion by a rather peppery and  judgemental butterfly king. Ozma has a few adventures with new Friends Lambert the white lamb a cast out from his flock as he is not purple! As well a highway man called Toby, who isn't really a highway man but is trying to hold up a family tradition instead who decide to befriend Ozma and Lambert. Eventually they bump into haughty and frustrated Kabumpo who is searching for missing Ozma alone after becoming somewhat exasperated that  the Emerald City Courtiers will not listen where he believes Ozma is.
Kabumpo in a vain hope of hero worship and self importance, steals off with Ozma and Co back to the Emerald City so that everyone can see how wonderful and heroic he is, unfortunately for Kabumpo this doesn’t go quite accordingly to plan as he also believes Ozma was kidnapped by the Toby. Kabumpo is well realised and affectionately written by the Mcgraw's as written in Tribute to Thompson's character, there is as magic box as well which now gives more than a few nods to Thompson's Kabumpo in Oz.

Interestingly Ozma is disguised as a boy which the Mcgraws use as a plot device throughout the book and this leads to great meeting with Jack Pumpkinhead where he mistakes Ozma for Tip his father of course. This scene and illustration of the Scarecrow Drawn like J R Neill’s Scarecrow from the Marvelous land of Oz are nicely little references to the book of the same name.

Of course Ozma memory is restored and all is right again in the end but it was fun getting there.

At first it easy for an Oz reader to think that the Mcgraw's are treading an all to familiar Oz story there are elements that would appear to be familiar with Baum’s Lost Princess of Oz.  For a refreshing change Ozma is not kidnapped or imprisoned she has simply forgotten everyone after drinking from the Water of Oblivion which wipes her memory and then she goes on her own adventures.
There is even a funny scene at the end where Ozma’s court friends cannot quite believe that she wasn’t kidnapped or enchanted by by Toby. The only other story that Ozma is a central lead isthe Marvelous Land of Oz although she is Tip throughout, and Glinda of Oz is probably one of the last Oz book to have Ozma as a central role although this is still from the point of view of Dorothy! Ozma is barely used in the Thompson books and certainly never as a central role although this is probably for the best as her Ozma is not very well characterised and lacks the compassion of Baum's Ozma.. As a result we get  a short but refreshing Oz story! Ozma does not get such a central role again in the books in my collection until Edward Einhorn’s brilliant Paradox in Oz.

The illustration’s & Book format.
I have declare I am not a great fan of Dick Martin illustration’s that not to say I hate them, as they can be whimsical and pretty when he put his mind to it his illustration's as in the Mcgraw's Merry go round in Oz are much better. I feel his style is a little lacking in detail and to cartoony for me especially the meat “human” characters. This is probably as I love Jon R Neill’s fine illustration’s the most and  his human looked very human.
Martin's illustration's are certainly far superior to Frank Kramer or Dirk Gringhaus, but not at the level I feel that John R Neill, Eric Shanower or Denslow.
It is clear that he has not taken much time on the illustration in this book when you compare the illustration to his work on Merry Go Round in Oz and I believe from conversation with other Oz fans he is responsible for the books odd formatting. Which oversized so that he didn’t have to draw many illustrations.
This is my biggest gripe with the book The McGraw's story is wonderful, the book format is truly awful. It is just a little large than A4 sized paper back with no printing on the spine. It looks bland and does not match any of the rest of the book in my Oz collection! Well apart form other three international  Wizard of Oz books I own in the same format. I know there is a hardback out there but I am curious is this an improvement does this match other Oz books more? I'm an obsessive Oz collector and like some nice stylised uniformity in my collection.

So to finish of this Eloise Wrote three Oz books in her life time two with her Daughter Lynn Mcgraw. Although I believe that Eloise herself was the main writer, She could of wrote another 20 for me it is clearly evident why she was nominated for Newberry Honour Award. Out of all the famous forty I feel she is the most skillful writer.
I haven’t yet read any of her non Oz, but do intend to so if any of you have any recommendation on some of her other work particularly fantasy can any of you let me know in the comments pages.
I’ll be back with another Eloise’s Oz books in due course, as she has two in my top ten and the third was not far off in reaching the top 10 either!

On my next post I have a report from Disneyland Paris which has both an MGM Wizard of Oz connection and a Disney Return to Oz connection. Which I promise will come much sooner!

Posted by Colin Ayres British Fan Of Oz at 16:44