The Wonderful Series of Oz Anime 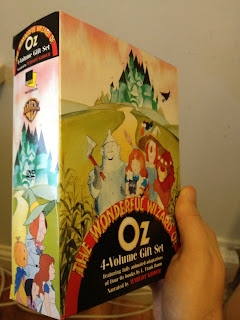 I finally have obtained digital copies of all 52 Episodes from the Cinar Wonderful Wizard of Oz Series. Although Cinar didn't actually make the series this is just a well voiced translation from the Japanese Anime Series Oz no Mahōtsukai. The Series was based upon L Frank Baum's The Wonderful Wizard of Oz, Marvelous Land of Oz, Ozma of Oz and The Emerald City of Oz.

I really enjoyed the Cinar series it was possibly shown in the UK 1989/90 on CITV which rudely and abruptly stopped at China Country episode not even finishing the Wizard of Oz story! I figure it must be around about this time, as I remember it was shown at the same time as Ducktales and I used to love that show as well, at 1989 I would have been 10 at the time! The Cinar series is responsible for me discovering the books due to the end credit listing the 4 books the series was based on, I used this infomration to go to the local library where my mind was then blown by the lists of books that Baum alone wrote!

I used to rent cut down movies of The Wonderful Wizard of Oz and The Emerald City of Oz movies from local video store the now long defunct Titles Video regularly at only 50p a day.
Frustratingly this video store or any of the others had the cut downs for The Marvelous land of Oz or Ozma of Oz.
I did fortunately manage to get VHS copies of both to buy eventually,  but frustratingly you couldn't get any copies of The Emerald City of Oz to buy!

Then series was repeated with the entire 52 Episode run on Channel 4 in Mid 1990's which is when I recorded the show on VHS although I was still missing a couple of episodes and the tapes over time were getting a little worse for wear. Then alas VHS died a death and I junked the tapes as they were no use any more, as a lover of new gadgets VHS was rejected in the early 2000’s in our house to make way for DVD only.

For years I have had a copy of the cut downs movies on DVD from America, I really do hate the front cover to the DVD box-set the drawing is very poor. I am pleased now to have the 52 Episode’s as the stories are much better with the full content! Which come in at around 90 mins, the series version of The Wonderful Wizard of Oz runs around 6 Hours! So thats a heck of a cut,

There is though sadly one missing element to the 52 Episode series and that is the theme tune is "Searching for a Dream" by the parachute club for every single episode, which is a great song especially for Oz. although on the Cut down VHS/DVD release each "movie" has it own theme all sung by the parachute club.

"Wonderful Wizard of Oz" retains "Searching for a dream"

"Marvelous Land of Oz" has "Listen to your heart"

"The Emerald City of Oz" has "Close your eyes"

I especially think that "Listen to your heart" and "taste the rain" are great alternative Oz intro's "close your eyes" the least strong.

I have searched the Parachute club but cannot unfortunately find any full length version of the songs which is shame as I'd love to have them. If anyone knows where I can get full version I would like to know.

As I now have all 52 Episodes I will post further reviews later and some comparisons with the books.

You can currently watch the whole 52 Episode over on Jaroo although they are only showing 4 episodes at a time.

On the next post I will be back number 9 in my favourite Oz books chart.
Posted by Colin Ayres British Fan Of Oz at 15:25