Yes, this 1935 Ruth Plumly Thompson Oz book, is the only Thompson book to hit my top 10!

What’s not to love Ozma, Glinda and the Wizard and anyone else who could pose any immeadiate threat to the opposition, have not only gone missing but have been replaced by the fat lazy King Skamperoo of Skampavia is now self proclaimed Emperor.
Only nobody in Oz seems to care, or even remember who Ozma ruler of Oz is, not even the Scarecrow! Nobody that is other than everyone's favourite american Dorothy Gale and a flying Pig called Pigasus!

Like other Thompson Oz books The Wishing Horse of Oz it's not without it's faults, but I still feel this is one of her strongest Oz books. Perhaps it because she doesn't mess much with Baum’s characters as Oz is effectively rewritten so it is expected Thompson's cheery Citizens of Oz are acting oddly.

Thompson's Oz is rarely dark, but this time Dorothy can't even rely on any of her old friends to help her save the day so, so must call upon an old foe of sorts Kaliko king of the “nomes” not Gnomes as Thompson annoyingly changes.

What I enjoy about this book is not only is there some real sense of suspense, when the plot is unravelled, the Villain of the book Skamperoo is punished to an extent but not with total destruction, Skamperoo is actually reformed hurrah! something Baum would do more often with his villains.
The way in which Thompson had previously executed other villanous characters in her earlier Oz stories has always jarred with me, especially Glegg who is forced to drink his own deadly concoction, whilst his remains are cheerfully swept away by Scraps in Kabumpo in Oz and even worse Ozma instructing Mombi be put out with a bucket of water in The Lost King of Oz.

Furthermore there are no hidden royalty or obvious transformation's a tired formula Thompson had over used by this point. Pigasus an already a previously established character is a likeable Oz addition. Thompson’s animal characters are often her best citizen additions to the series, she had a knack for writing loveable creatures but she did not have the successful flair Baum had at bringing more unusual objects to life like the Scarecrow and Tin Wooman, her closest to Baum's unusual characters would been Peg Amy the living wooden doll, had she not turned out to be a Princess in disguise. 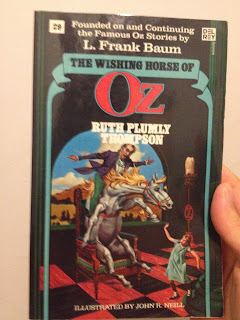 My edition of the Wishing Horse of Oz is the oversized Del Rey paperback, I was not aware that the Del Rey Oz books  were printed in two sizes, I have are oversized where the cover image is stretched, I only became aware of this when David Maxine pointed this out to me whilst visiting California and showed me an original smaller sized Del Rey where the artwork on the cover is not stretched.

I intend to replace all of my Del Rey Oz books eventually with first edition and vintage colour plate Reilly & Lee books.

See you next time, where I will discuss the ibooks of Oz, then I’ll return with Oz chart number 9.

Posted by Colin Ayres British Fan Of Oz at 16:45